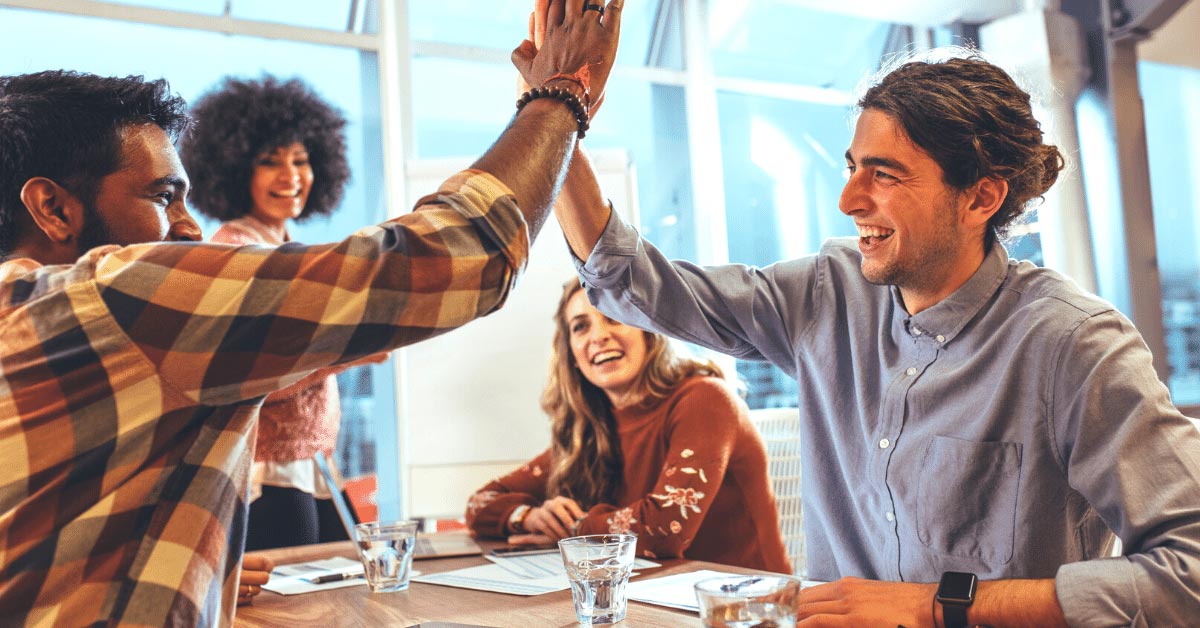 As a French coach, one of the most common questions I get asked is “How do you say you’re welcome in French?”

Well, you can actually choose from a variety of options.

So it’s important to know which “You’re welcome” to use depending on the situation you’re in.

Don’t worry! In this article, you’ll learn the different ways to say “You’re welcome” in French and when to use them.

When you want to keep it simple: De rien

This is the most popular and common “You’re welcome” in French.

It literally means “Of nothing” and has the same sense as “It’s nothing” in English.

De rien is the basic response when someone thanks you for doing something unimportant.

You hold the door for someone or you offer them a compliment, and you’ll most likely answer with De rien after they say Merci.

It’s the most ordinary option, often uttered without much consideration. As such, it tends to downplay the reason why someone is thanking you in the first place.

Note that Ce n’est rien (literally “This is nothing”) can be used in the same manner, but it’s less common.

While De rien is suitable in many situations, it’s rather informal.

So in a professional setting or when you need to make a good impression, it might be better to go with a different option.

When you want to be super polite: Je vous en prie

This is the most formal way to say “You’re welcome” in French.

That’s not surprising, considering it literally means “I pray you for it”, which sounds pretty archaic.

Saying “You’re welcome” to more than one person? You can go with Je vous en prie too because vous is also used when speaking to multiple people.

When you want to be polite with a friend: Je t’en prie

This has the same meaning as Je vous en prie.

Except you use it with people you know well or when you address someone as tu.

It’s a great choice when someone thanks you for a nice gesture or something important. In a way, it’s more genuine than just saying De rien.

This one is easy and literally means “No problem”.

Use it to reassure someone thanking you that you didn’t mind helping them. So they won’t stress over whether they wasted your time or were a burden to you.

This option is only appropriate in informal situations, even if you don’t know the person, as long as you did something to help them.

Pas de soucis (No worries) can also be used in the same manner as Pas de problème.

When you want to be casual: Il n’y a pas de quoi

This means “There is no need to thank me, it was nothing”.

It can be your casual answer when someone thanks you for doing something nice for them.

It’s quite informal though, so use it only with friends, family or unimportant strangers (as long as they’re not your boss!).

It’s also very common to hear a shortened version such as Y’a pas de quoi or even Pas de quoi.

This literally means “With pleasure” and has the same sense as “My pleasure” in English.

It’s an excellent answer when someone is thanking you for something you’re happy to help with.

This option is especially common in southern France, particularly around Toulouse. But it’s still easily understood everywhere else.

For example, I’m a native French speaker living near Paris and I use Avec plaisir all the time, even though I’ve never been in southern France.

I didn’t even know it was specific to this region before writing this article! And no one ever asked me to clarify what I meant.

Avec plaisir is neither really informal nor formal, making it a great choice when you want to say “You’re welcome” to someone you helped, without worrying about whether or not you’re polite enough.

Another less used variation of this is Tout le plaisir est pour moi (Pleasure is all mine). It’s quite formal and a little old-fashioned, but you’ll definitely sound fancy if the person thanking you is an elderly or in a position of authority.

When you feel you should be the one saying “Thank you”: C’est moi qui vous remercie

It means “It’s me who thanks you”.

Use it when someone tells you Merci while you feel like you should be the one thanking them.

If you’re buying clothes in a shop and you’re thanking the seller, you might hear them answer with C’est moi qui vous remercie.

By essence, this option is quite formal.

– (Customer paying at a restaurant): Merci. (Thank you.)
– (Owner of the restaurant): C’est moi qui vous remercie. (It’s me who thanks you/You’re welcome.)

You can also use the shortened version C’est moi which is more common but slightly less formal.

When you want to say “Thank you too”: Merci à vous

Sometimes, two people help each other out.

If this happens to you and the other person thanks you first, you can answer with Merci à vous to thank them in return.

For example, let’s say your car breaks down in the middle of the road. Someone walks by and helps you fix your tire. Once it’s done, you drive them to their destination to thank them for their assistance. When they tell you Merci, you can respond with Merci à vous.

This option is used in formal situations, especially:

For more informal situations or when talking to a friend, you can say Merci à toi instead.

In Belgium, if you hear someone respond with S’il vous plaît after you say Merci, don’t be confused.

But in Belgium, it means both “Please” and “You’re welcome”.

This option is appropriate in formal situations or when talking to someone you don’t know.

If you’re responding to thanks from a friend, you can say S’il te plaît instead.

Just make sure not to use S’il vous plaît or S’il te plaît as “You’re welcome” outside of Belgium. No one will understand you if you do.

When you’re in Switzerland: Service

In Switzerland, one of the most popular ways to say “You’re welcome” is Service.

Which comes from the phrase À votre service (At your service).

It’s a common response when you do something for someone and they thank you.

It’s a polite way to say you were doing your duty or to be extra courteous.

Outside of Switzerland, no one will understand this though, so keep it in the country.

If you’re not sure whether or not to use Service, you can always go with one of the standard French options such as Je vous en prie. Swiss people will definitely understand you.

When you’re in Quebec: Bienvenue

Doesn’t Bienvenue mean “Welcome” (as in “Welcome to Paris”) in French?

But in Quebec, Bienvenue is used as both “Welcome” and “You’re welcome”. Easy, right?

This option is appropriate in almost any context.

However, if you need to be extra formal, you can go with Je vous en prie, just like in France.

Keep Bienvenue as “You’re welcome” only in Quebec or people might not understand you.

For a more general French Canadian option, you can go with this last one instead.

When you’re in Canada: Ça me fait plaisir

This is a common response to Merci in Canada (not just Quebec, unlike the previous example).

In the French-speaking world, Ça me fait plaisir means “It makes me happy”.

But in Canada, you can also use it to say “You’re welcome” in most informal situations.

If you’re thanking someone (like a seller, a teacher, a taxi driver, a friend, etc.), they’ll often respond with Ça me fait plaisir.

It’s like the French Canadian version of De rien or Il n’y a pas de quoi.

Again, don’t use this as “You’re welcome” outside of Canada. But it’s an excellent phrase to remember if you want to sound like a local.

According to a popular cliché, French people are rude.

But it mostly applies to Parisians. Actually, even non-Parisians consider them rude.

That’s because Parisians always seem in a rush and living in a big city is often frustrating.

But there’s no reason to generalize. After all, there are good and bad eggs everywhere.

So while it’s true that French people aren’t super expressive, it’s usually frowned upon if you’re not polite in many situations.

Things like Bonjour, S’il vous plaît, Merci and Au revoir are a must.

If you don’t say Bonjour to the cashier when you go to pay for your groceries, that’s pretty bad!

The same goes for saying “You’re welcome” in French.

Just choose one version and go for it!

Now, you know exactly how to say “You’re welcome” in French!

With so many options, maybe you’re worried you won’t have time to think of the most appropriate answer in the heat of a conversation?

Easy, just keep this in mind:

You’re not sure if you’re in a formal or informal situation? In this case, stick with Je vous en prie. While it might sound over-the-top at times, at least you won’t offend anyone by being too familiar.

What is your favorite way to say “You’re welcome” in French? Share it in the comments section below!