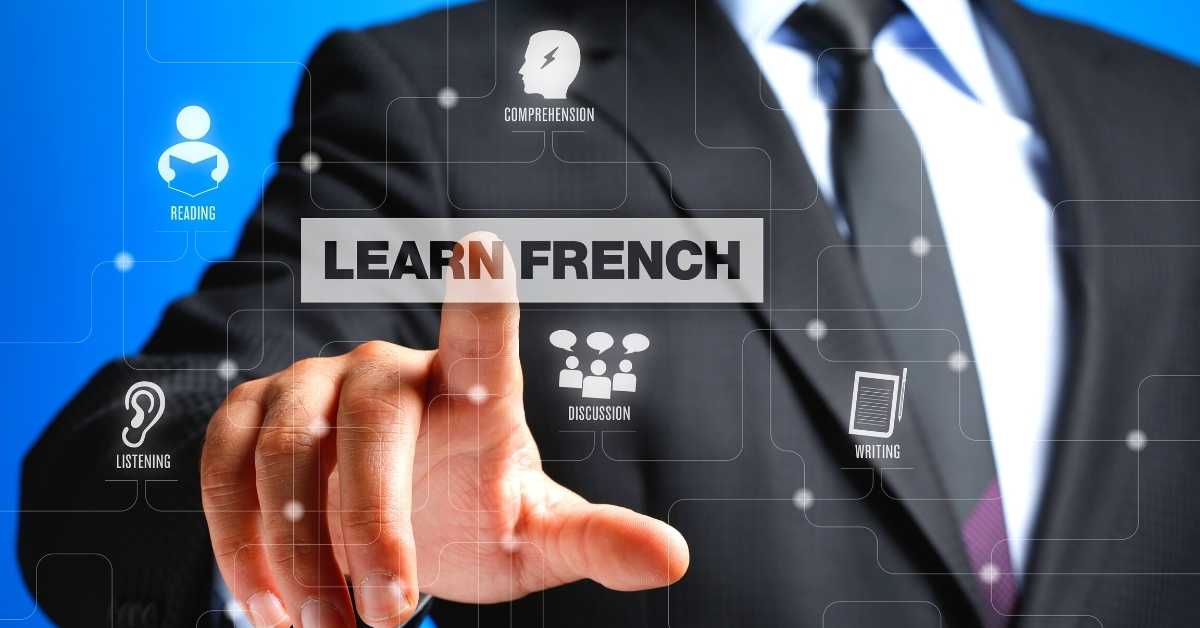 As a French coach, one of the most common questions I get is “How long does it take to learn French?”.

A general rule of thumb is that it takes between 500 to 750 hours to be fluent in French. But how quickly you’ll pick up French also depends on several factors, specific to each student.

In this article, you’ll find out:

What is French fluency?

But the true meaning of fluency is often mistaken.

It’s not about speaking perfect French, never making mistakes and understanding absolutely everything, even the most complex topics (like law or medicine, unless you’re an expert in those fields).

To be honest, if this is your definition of fluency, learning French will take a long time, leaving you desperate and wanting to quit because you’re not achieving the unrealistic goal you set for yourself quickly enough.

Instead, let’s think of fluency another way: It’s all about being able to express yourself easily and confidently in everyday situations while understanding the majority of written and spoken French.

Fluent speakers may still make some mistakes, but they can speak naturally without much pause.

Let’s see what kind of proficiency level you need to achieve such fluency.

For that, we’re going to refer to the Common European Framework of Reference for Languages (CEFR), the most commonly used guideline in Europe. It breaks down language proficiency into six levels, helping you set realistic goals.

From reading this table, you can see that “fluency” as we’ve defined it corresponds to a B2 level.

That’s more reachable than thinking being fluent is achieved only when you’ve unlocked a C2 level, right?

How many hours does it take to learn French?

Several institutions have run tests and experiments to try to determine the amount of hours needed to reach that B2 level. Here’s what they found.

As you can see, each institution has its own idea on the subject and keep in mind that these tests were performed under ideal conditions (in a classroom, with teachers).

So take these numbers with a pinch of salt, even if they are a good starting point to give you a general idea of how long it will take you to learn French.

If you’re studying on your own, learning French will likely take you more time.

The reason why it’s impossible to tell you specifically “Study X hours and you’ll be fluent in French” is because everybody is different.

There are several factors to take into account. Let’s talk about them to get you better prepared.

What is your mother tongue?

You may not know this, but your mother tongue plays a big part in how quickly or slowly you learn French.

In theory, the closer French is to your mother tongue, the easier it will be to learn.

French is part of the Romance languages, which descend from Latin.

If your mother tongue is another Romance language (Spanish, Italian, Portuguese or Romanian), you’re in luck because you’ll pick up French faster. You’ll find many similar words, phrases and grammar rules between them, saving you a lot of learning time.

French is also considered one of the easiest languages to learn for a native English speaker. That’s because English can be considered a cousin to Romance languages.

Sure, the grammar isn’t quite the same. But if you speak English, you already know plenty of French words! For example, “question”, “situation” or “information” all exist in French, with the same ending and slightly different pronunciation.

But what if you’re not a native speaker of English or one of those other Romance languages? Are you doomed to struggle studying French?

Even if Romance languages or English aren’t your mother tongue, if you’ve learnt one of them as a second language, you’ll still have a head start.

Since you’re reading this article in English, I’ll assume it’s either your first or second language, so you’re already ahead in the game. Congratulations!

Have you learnt another language before?

If you ever learnt a second language, then picking up another language (be it your third, fourth, etc.) becomes gradually much easier.

You have an advantage because you know how to learn a language.

You already have a general idea of which study techniques work for you and which ones don’t. Not everybody likes learning the same way after all.

You’ll also have a better grasp of basic grammar concepts (verb conjugations, tenses, etc.) and vocabulary, especially if you already learnt a language close to French.

However, don’t worry if French is the first language you’re learning besides your mother tongue.

There are other more important factors to consider, on which you have some actual control.

Why are you learning French?

Motivation is a key element when it comes to how long it will take you to learn French.

Ask two people why they are learning French: One answers that her boss is forcing her, the other says that she loves the French culture.

Who is more likely to actually learn the language and stick with it?

I’m sure you guessed right!

The second person will learn much more quickly and with more success because she’s actually interested in the language.

If you don’t really want to learn French, then it will be very difficult for you and you’ll eventually give up.

Because yes, learning French takes time and effort. Even with the highest motivation, you’ll still have some disheartening moments when you don’t understand something straight away.

It happens, but don’t let that discourage you either! You’ll just have to push through and when you have reached your B2 level, you’ll be proud of your achievement.

If you have a personal interest in French, you’ll overcome those moments of doubt and you’re also more likely to practice outside of your study time. The more you practice, the faster you’ll progress.

You get the idea.

And if you need some more motivation, here are 13 good reasons to learn French.

How much time do you spend studying French?

It’s simple: If you study French only 1 hour a week, it will take you 10+ years to become fluent. And I’m being generous with this number. In reality, it’s more likely you’ll never reach your B2 level, ever.

If you want to see real progress and fast, you need to seriously up your game.

I don’t mean work 8 hours a day and learn French in 3 months though. You’ll probably blackout if you do that.

Instead stick to a regular schedule: Start with 30 minutes or 1 hour per day, ideally every day or at least 5 days a week.

Consistency is key when it comes to language learning.

By the way, if you’re thinking about cramming all your study time in one single day instead, that’s not a good idea.

If you spend 5 hours studying every Sunday, chances are you won’t retain a lot and you’ll have forgotten much by the time next Sunday comes.

So make sure to practice your French a little bit every day to get better results.

How are you learning?

The way you’re learning is a crucial factor. I would even say that it’s the most important one!

You can have the highest motivation and be consistent with your study time, but if you don’t know how to learn French properly and efficiently, then you’ll lose all your advantage.

In theory, with all the free information available on the Internet, it’s possible to learn French on your own.

However, that requires a lot of organisation and focus on your part.

And the amount of information can be quite overwhelming, leaving you wondering what you should work on or not.

That’s why I advise you to take a French course of some sort, at least when you’re starting out. It can be a physical class near your home, an online course or a book course.

I personally prefer an online course or a good book over a physical classroom, because it allows me more freedom in how and when I work.

Any good course will give you a great head start, thanks to its structure. You won’t have to wonder if you need to be learning this or that, everything will be laid out for you, which means that you’ll learn faster.

Of course, these kind of courses cost money, and maybe you’re hoping to learn French without spending a dime. It can certainly be done, but it really all comes down to the old battle of Time versus Money.

If you’re serious about learning French and are able to invest in it, buying a course will save you a lot of time!

There are plenty of French courses out there, for every budget and learning style. Just make sure to choose the one that suits you best.

French classrooms, textbooks and courses are a great starting point. Through them, you learn the basics of the French language and its structure, so you can make up sentences yourself.

But they only get you so far…

To really succeed, you also need to make French a part of your life.

Obviously, the ideal option is to travel to France and have no other choice but to speak French.

However, contrary to popular belief, you don’t need to be in France to immerse yourself in French! Nowadays, you have plenty of options to practice French, especially with the power of the Internet and technologies at your fingertips.

Trust me, this last one isn’t as crazy as it seems! It’s actually a great way to force yourself to think in French and build up your confidence. Plus, it’ll come in handy when you’re really faced with whatever situation you acted out.

All these things aren’t considered strictly “study time”. When you do them, you’re not always actively studying. For example, you don’t need to stop and search every word you don’t understand. Instead, try to guess what the French means by the context and the words you already know.

By writing and speaking with someone, you’ll also progress much faster. That’s because you’ll make mistakes and get feedback, which will allow you to improve over time.

There are plenty of ways to spice up your French learning journey. Choose what you like best and have fun with it!

For an English speaker, becoming fluent in French should be fairly easy.

If you study consistently 1 hour per day and practice your French on the side, with the right resources, you’ll be able to speak French at a B2 level in one year and a half.

When it comes to language learning, this is actually a reasonable timetable for most learners who have a life outside of French.

Remember: Learning French is a journey, not a destination. So enjoy it and the rest will follow!

This is the single most concise and informative page I’ve ever read on language learning. It answers all the questions one asks concerning level, objectives and expectations. Absolutely every issue has been addressed.

Hello,
Thank you very much for your wonderful comment!
I’m very happy to know you found this article useful 🙂