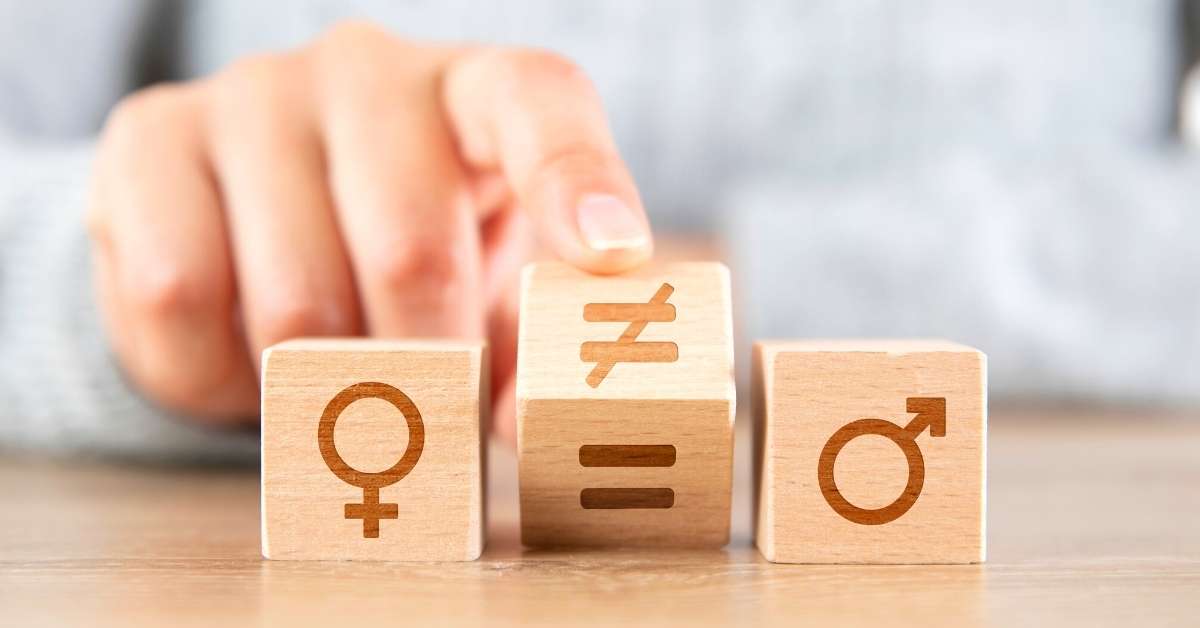 French noun gender is one of the most basic concepts of French grammar.

Understanding French genders can be challeging, especially if your native language is genderless.

Every time you come across a French noun, you’ll have to ask yourself whether this little word is a boy or a girl.

As a French coach, my goal is to help you get through this.

In this article, you’ll learn:

Understanding the importance of masculine and feminine in French

The concept of grammatical genders may be a strange one to grasp if your mother tongue is a genderless language. For example, in English, nouns are mostly neutral.

In French, nouns are gendered: They are either masculin (masculine) or féminin (feminine).

In the dictionary, all French nouns bear with them an m or f, so you can easily check their gender.

Knowing the gender of a noun in French is important because it determines:

If you want to build a grammatically correct French sentence, identifying the appropriate gender of a French noun is therefore essential.

While recognizing the correct gender 100% of the time may be difficult due to exceptions, there are some ways to guess the gender of a French noun with high accuracy.

How to recognize masculine nouns in French?

In general, you can spot masculine nouns by checking their ending or their category.

Here’s a list of the most common masculine noun endings in French.

In general, French nouns included in the following categories are masculine.

How to recognize feminine nouns in French?

Like their masculine counterparts, you can spot feminine nouns in French by checking their ending or their category.

Here’s a list of the most common feminine noun endings in French.

In general, French nouns included in the following categories are feminine.

How to know the gender of countries in French?

To know if a country’s name is masculine or feminine, you can also check the ending.

If the country’s name ends with the vowel -e, it’s feminine:

If the country’s name ends with another vowel or any other consonant, it’s masculine:

How to know the gender of jobs in French?

In the past, nearly all professions had only a masculine form. Today, the majority of these same professions have been given a feminine form.

Here are a few things to keep in mind when it comes to job titles in French.

Adding an -e to create the feminine form

For some professions, simply take the masculine form and add an -e at the end to make it feminine.

Changing the ending to create the feminine form

For some professions, adding an -e won’t be enough. In those cases, turning the masculine into feminine requires a more important change.

Here are some common masculine endings that you can turn into feminine.

Professions that are the same in masculine and feminine forms

Most professions ending with -e have the same spelling, whether the person is a man or a woman.

Professions that exist only in masculine form

Some professions use only the masculine form, but they can refer to both men or women. You only need to change the article in front of the word.

How to know the gender of animals in French?

Animal names are also either masculine or feminine in French when you refer to the generic gender of the species.

So you can’t say une lion to refer to a female lion.

But what if you want to refer to the specific gender of an animal?

In that case, you have 3 options.

Nouns that change meaning depending on their gender

Some French nouns are homographs: They have the exact same spelling, but not the same meaning.

This difference in meaning often results in a different article being used in front of the noun.

So a word with the same spelling can either be masculine or feminine, depending on what you want to say.

Fortunately, there isn’t a huge list of words presenting this particular challenge, but here are the most important ones.

You can’t build a grammatically correct sentence in French if you don’t know the gender of the noun.

Why? Because gender has an influence on several grammatical elements.

Knowing the gender of the noun will help you decide which article to use in front of the word.

In French, there are 3 types of articles:

Note: If a noun starts with a vowel or an -h, the definite article will change to l’, for example l’amour (love) or l’hôtel (hotel).

Since every French noun has a gender, you will need to use the correct pronouns.

Remember: This applies to people, places, things and absolutely every word in French!

Explanation: la ville is feminine, so the pronoun used to refer to it is elle.

Everything is fairly easy when you’re referring to only one singular noun (masculine or feminine) or to several nouns of the same gender.

But there’s a tricky aspect of French grammar when you refer to several nouns of both genders at once.

In French, the masculine takes precedence over the feminine (Gender equality, where have you gone?).

Explanation: la mère and la sœur are feminine, while le père is masculine. The pronoun used to refer to them is ils.

It doesn’t matter if there are several feminine nouns and only one masculine noun in the sentence.

As long as there’s even one masculine noun, you’ll need to use the masculine plural pronoun. This rule also applies to verbs and adjectives.

Sometimes, the gender of the noun influences the way you conjugate the verb: The verb needs to agree in gender and number with the subject.

Verb agreement is most notable with compound tenses and in two specific cases.

Case 1: When you use a compound tense with the auxiliary être

Let’s take the passé composé (arguably, the most useful compound tense in French) and conjugate the verb aller (to go) with it.

Here are the general rules to follow when it comes to verb agreement (you can see them in the table above):

In the table, the subject was a pronoun which makes verb agreement easier.

But the same rules apply if your subject is a noun, which is why you need to know it’s gender to make the correct verb agreement.

Case 2: When you use the auxiliary avoir and you have a direct object before the verb

In that case, you also need to make the verb agree in gender and number.

The rules and endings are the same as those seen in the previous case.

Explanation: The direct object que is placed before the verb faire. The subject is la remarque which is a feminine and singular noun, therefore the verb is conjugated with an -e: j’ai faite.

Keep in mind that knowing the verb agreement rules are useful, but only in written French. In spoken French, there’s no difference as the pronunciation stays the same.

The adjectives also need to agree in gender and number with the noun.

Here are some adjective gender rules you should know.

For most adjectives, you just need to add -e, -s or -es to the masculine singular. Here are some examples with the adjectives Big, Green, Stubborn and Hungry.

If an adjective ends with an -l or -n, the same rule applies, except you need to double the consonant. Here are some examples with the adjectives Good and Kind.

If the adjective already ends with an -e, the feminine singular remains the same as the masculine singular and you just need to add an -s to the plural forms. Here are some examples with the adjectives Sad, Calm and Funny.

Other common rules include the following:

As usual with French grammar, there are several exceptions. But by knowing the most common rules of adjective agreement, you can handle the majority of French adjectives.

On top of everything you learned above, here are some ways to practice learning French noun gender.

The easiest way is to always memorize the noun with its article. Don’t just learn that voiture means “car”, learn that la voiture means “the car”. By memorizing words like that, you’ll get better at dealing with French gender.

You can also memorize the noun with an adjective, since the adjective must agree with the noun. Instead of learning that la voiture means “the car”, you could learn la voiture est verte (the car is green).

Try these tips, or make up your own, to retain nouns and their gender more easily.

Now you know exactly how to handle French noun genders!

By following the rules and tips in this article, you’ll be able to guess the gender of a French noun accurately the majority of the time.

You can exercise yourself by picking random nouns and trying to guess their gender. Then, learn to build a sentence around it.

Be patient with yourself though. You might not get it right on the first try, but keep trying and you’re sure to make progress along the way.